REPORTÉ - Where has the Empire Gone? Scientific Experts and the Legacies of Italian Colonialism (1945-1960) 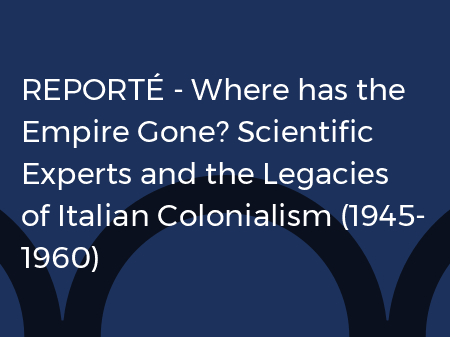 “Where has the Empire Gone? Scientific Experts and the Legacies of Italian Colonialism (1945-1960)”

In 1945, Italy lay in ruins and the days of Mussolini’s bombastic proclamation of the Italian Empire of East Africa felt like the echo of a distant past. In the memory of most Italians, Italian colonialism ended with Fascism in World War II. In fact, the postwar republican government endeavored to recover part of the Italian colonial empire, an effort that culminated with Italy’s return to Africa under the mantle of the U.N. Trusteeship of Somalia or A.F.I.S. (1950-1960). This paper examines the role of former colonial scientific experts as active contributors to Italy’s return in Somalia and key crafters of the memory of Italian colonialism in the postwar period. As their careers and work of previous two decades were at risk at the end of the war, colonial experts camouflaged their activities during the fascist regime in a mold that the Allies could appreciate: the developmental model of modernization. “Il lavoro italiano” (Italian work) was extolled as the main argument to promote Italy’s return to Africa and ground its legitimacy in the soil of Libya and Somalia. Colonial expertise became a crucial token for Italy’s rehabilitation in the international order. Moreover, Italians used the language of development to flatten the memory of Italian imperialism in a static picture that is still very much present today and is at the foundation of the myth of “Italiani Brava Gente.”