Mediterranean Empires of the Interwar Period 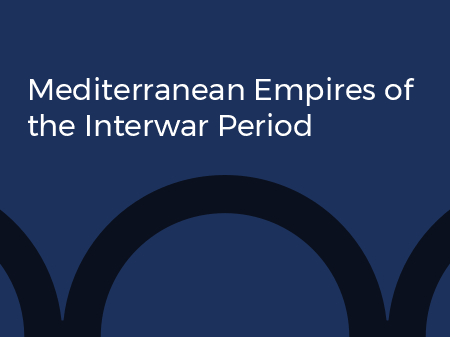 Mediterranean Empires of the Interwar Period

After World War I, the Mediterranean was reinvented. The region moved from the margins to the center of political attention and became the object of comprehensive imperial visions. New policies arose that were aimed at fundamentally transforming both the region and its people. After the dissolution of the Ottoman Empire, borders were redrawn irrespective of the existing social, ethnic and religious composition of the local populations. France and Brit­ain extended their imperial rule to include the former Ottoman provinces in the Levant. In turn, Fascist Italy challenged their hegemo­ny over the region and declared the Mediterranean a “mare nostrum”. Our workshop focuses on the dynamics initiated by the Fascist chal­lenge and on the competing, yet related European vi­sions of the Mediterranean that it brought forth. We will discuss in how far the concepts of geopolitics, biopolitics and chronopolitics are helpful for grasping both the visions of the Mediterranean as well as the characteristic features of the imperial practices on the ground. We also take a closer look at islands and the changes their populations were confronted with when these highly contested places changed hands. Furthermore, the workshop scrutinizes mutual perceptions of the Mediterranean empires and the trans­fer of imperial know-how. Finally, we hope to highlight the ambivalent role of Christian missionaries. Our aim is to better un­derstand the making of the modern Mediterranean in what turns out to be a crucial period of its transition.