Plurilingualism and the kingdom of Naples 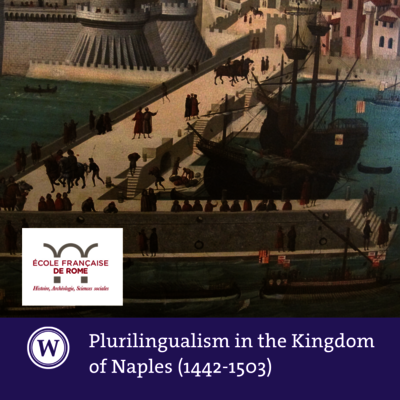 In Naples, at the time of Alfonso and Ferrante of Aragon (1443-1458), the Catalan language was used in the city as well as in court, in synchrony with Castilian and various italic languages: Tuscan, Neapolitan, but also Greek and Latin, ancient as well as modern. The production of chancellery texts shows a development from Catalan only to the use of both Catalan and Neapolitan. Kings and nobles originating in Spain write alternatively in Catalan, then Castilian and Neapolitan, while Italians are less bilingual. In Milan, the Visconti then Sforza’ chancellery begins to use Italian in the first half of the 15th century. Languages used for communication - written but also oral - are rarely ‘pure’ dialects, and hybridizations are not always easy to identify. As the memories of the old French dynasty, its languages and models have not yet disappeared, the Kingdom of Naples sees the development of different types of hybridization, transliterations and borrowings.

Studying literary and administrative documents, private and official correspondence from this perspective helps to understand the choice of languages used by authors, and the use of diachronic linguistics offers a new approach to the study of the use of languages during the humanistic times. The production of anonymous clerks, of well-known authors like Giovanni Pontano, of kings and educated noble men and women offers us a large corpus of texts where the links between plurilinguism and the development of languages can be studied.

Taking the Kingdom of Naples as a starting point, the workshop will offer case studies of other languages and countries to broaden towards a re-examination of the question of plurilinguism in Early Modern Europe.

To attend the conference: