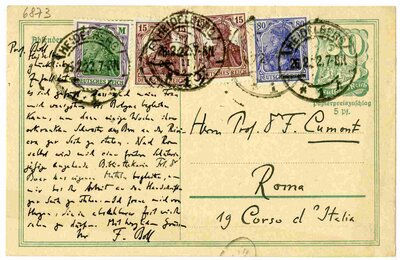 The year 2022 marks the 75th anniversary of the death of Franz Cumont (1868-1947), whose rich archives as well as his personal library are kept at the Academia Belgica. They are eloquent witnesses of his life and of the way he worked.

The materiality of knowledge, its concrete conditions of production and circulation, and the various constraints that interfere with science are the subject of renewed attention in the history, anthropology and sociology of the humanities. This is why the conference aims to take another look at the traces Cumont’s intellectual activity has left: his archives at the Academia Belgica and his presence in other archives, his bibliographic records, his publication projects, his travel diaries, numerous and precious photographs, as well as the objects that he collected or negotiated to acquire for various museums.

The purpose of this conference is not only to interrogate and analyse Cumont’s scientific activity and practice but also his network, his interlocutors or the institutions he collaborated with. Between the end of the 19th and the first half of the 20th century, in a context marked by colonial movements, two world wars, major scientific discoveries and the emergence of new disciplines, certain scholarly practices underwent major changes, while others - writing to each other, annotating publications, copying manuscripts or editing inscriptions - were perpetuated within a resolutely international Republic of Letters.

We will thus touch on the relations between the scholarly world and museums, between scholars of Antiquity and specialists in other disciplines or fields, who were familiar with different objects and other practices. The objective of this conference is also to continue, and even to amplify, a voluntarist approach to safeguarding a precious yet fragile heritage and to enhance it, so that it may in turn nourish other research on the history of ideas, cultural history, social history, the anthropology of science and scholarly practices, etc.

An exhibition organized at the Academia Belgica and featuring material from Franz Cumont’s archives and personal library will be opened on the occasion of the conference.